First they invited him to perform. Then, they uninvited him. Then they invited him back and sure enough, he rocked out the main stage of the Rototom Sunsplash Reggae Festival despite the presence of flag-waving protesters – some of whom threw bottles on the stage. But what happened exactly? Well, under pressure from Valencia BDS, the Rototom Sunsplash Reggae Festival organizers cancelled Matisyahu’s August 22 show, with organizers saying Matisyahu had refused to comply with their demand to pen a statement or a video message backing “the Palestinians’ right to a state.” Rototom also cited 5 unnamed artists who were scheduled to perform and who threatened to cancel their appearances if he was allowed to perform because he was “seen to represent Israel.”

A veritable media shit storm ensued, critical of Rototom’s decision. It seemed as if Matisyahu, a generally apolitical artist, was targeted because he was visibly Jewish. No other artists were asked to make a statement, even artists like Barrington Levy and Lee ‘Scratch’ Perry who have performed in Israel as well as bands like Solja who have performed with Matisyahu. As the media barrage continued, the usual suspects remained quiet – it seemed as if no one was willing to defend this prima facie act of gutter anti-Semitism. They remained quiet until Dan Sieradski, 4 days before the show was scheduled to take place, took to facebook and penned an obscenity-laden tirade, painting Matisyahu as a “prominent pro-Israel figure who has publicly supported the IDF and denied Palestinian identity” worthy of being boycotted. I enjoy obscenity-laden tirades as much as the next guy but the danger with writing those is that you have to make sure that your self-righteous indignation does not get the better of you. In this case, it sure did. What Sieradski penned was an ex post facto justification – pulling isolated facts and undocumented incidents together in order to make Matisyahu out to be a “douchebag” worthy of being boycotted. I mean, who knew Matisyahu was so political on the topic? But as Moriel Rothman Zecher, a Jerusalem-based anti-occupation activist observed “…one has to do a bit of digging to find Matisyahu’s Palestine views; i.e., one has to want to find them.” The problem with Sieradski’s screed is that he desperately wanted to find them indeed. Among the facts he dug up were Matisyahu’s house hunting in Israel (!!) and his penning a top-40 song about Jerusalem which quotes the Psalms and demonstrates Matisyahu’s love of Israel (!!!). He concludes “If you can overlook all these facts and still insist that boycotting Matisyahu is an unjustified act of antisemitism, you’re as completely full of shit as he is.” What Sieradski didn’t mention is the bad blood between the two. Matisyahu used to be Sieradski’s client, but things went south 9 years ago when the “Hassidic Reggae Superstar” became successful and decided to switch his management from J-Dub, a small non-profit, to a more experienced team better suited to manage his career. Calling Matisyahu a “False Messiah” Sieradski came off sounding more like a spurned lover than a reasonable analyst of Jewish culture. I guess this perceived betrayal still stings because the tone and timber of Sieradski’s first anti-Matisyahu screed is very similar to that of his latest, which he published on Jewschool in case you want to read it.

At that point, the Israel haters found their compliant Jew and the articles justifying Matisyahu’s banning started appearing on Web sites published by the usual suspects. Electronic Intifada’s article “It is not anti-Semitic to boycott Matisyahu” written by Israel hater Ali Abunimah may as well have cited Sieradski as a co-author. Mondoweiss similarly presented an article that cited the three or four contentious statements by Matisyahu that Sieradski referred to. None of these contradict Matisyahu’s facebbook assertion that “My music speaks for itself, and I do not insert politics into my music.” Why? Well, Matisyahu has been interviewed a lot. His music has given him a massive platform and if all really motivated individuals could find was 2-3 statements, one or two shows for very pro-Israel organizations and one person with questionable affiliations, well… yup. It’s pretty clear that Matisyahu has overwhelmingly not used his musical soapbox to promote a political agenda, bash Palestinians or encourage ethnic cleansing or whatever other nonsense is being alleged. 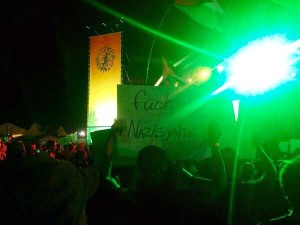 “Fuck Nazisyahu” No. We’re not at all anti-Semitic

And the BDS guys? Ugh what a muddleheaded bunch. Check out this statement, issued the day after Sieradski’s, where they go about justifying the cancellation of Matisyahu’s show but then specify that this action, undertaken by a BDS group, is not representative of BDS because BDS targets institutions and not individuals, but… but… still: “…we wish to make clear that our efforts are outside the remit of the cultural boycott of Israel as per the guidelines issued by the Palestinian Campaign for the Academic and Cultural Boycott of Israel (PACBI). BDS calls for boycotts against Israeli institutions that are complicit in Israel’s violations of international law, not against individuals. Unlike the cultural boycott movement against apartheid South Africa, the Palestinian-led BDS movement does not call for boycotting individual artists, academics, etc.” We’re called BDS, but we’re not BDS. We’re SUPER BDS! Wooo! This despite the fact that Tel-Aviv University educated Omar Barghouti, the capo di tutti capi supported the decision to boycott Matisyahu. He stated that Matisyahu’s lyrics are “so full of hate and denial of the very existence of the Palestinian people” yet he doesn’t cite any such lyrics. Maybe he believes, like Sieradski does, that “Jerusalem” with its Psalms inspired refrain is “so full of hate”:

Barghouti claims that the case against Matisyahu has nothing to do with his ethnicity or religion – never mind that any Jew who prays, whether it’s a morning, afternoon or evening prayer, or while reading the grace after meals etc. prays for the return to a rebuilt Jerusalem and that such prayers and aspirations have been a central element of Judaism for nearly 2000 years. Yeah. Never mind that.

In the end, everyone saw this for what it was and the Rototom Festival organizers re-invited Matisyahu to perform. In doing so they stated “Rototom Sunplash admits that it made a mistake, due to the boycott and the campaign of pressure, coercion and threats employed by the BDS País Valencià because it was perceived that the normal functioning of the festival could be threatened. All of which prevented the organization from reasoning clearly as to how to deal with the situation properly.” Clearly the outrage emboldened the organizers to not succumb to the BDS bullying and finally do the right thing. As such, Matisyahu performed and from what I can see, it was a great show. Protesters waved Palestinian flags and at one point, threw bottles onstage but Matisyahu was undeterred and BDS was handed yet another very public failure. More importantly, BDS was unequivocally exposed for the fraud that it is.

“One Day” in English, Arabic and Hebrew by Koolulam